This pretty much represents the state of the art for 3D printing right here: GE has gotten approval from the FAA to use a 3D printed part for retrofit on Boeing aircraft engines. The part does have some finish machining done to it, but the main structure of it is made by 3D printing. This represents a great leap forward in the use of 3D priniting technology, from limited use right to some of the most demanding application and testing procedures.

The real promise of the technology, which is demonstrated here, is the ability to make parts that would be difficult or expensive to make via other methods. In this case, the part isn’t unobtainable by more traditional manufacturing methods, but it might be costly to make traditionally. 3D printing allows the designers and engineers to work to the engineering needs of a part, with less consideration for the manufacturability of the part by traditional machining. This allows the design of some parts that might have been unmakable previously.

Ok, while the car that Local Motors built using 3d printing at the IMTS show was pretty impressive, this car is officially bad ass. I can say official, because President Obama and VP Biden checked it out, so it’s official. Really. The folks at Oak Ridge National Labs (“We don’t just make things glow in the dark!”) are doing a lot of investigative work about uses for new manufacturing technologies, like 3D printing. As a test case, they decided to build a replica Shelby 427 Cobra for the Detroit Auto Show, which is still the largest show in the world, I believe. Video from their site.

Another interesting use of 3D printing technology they highlight briefly here is to make large molds and forms. In this case, they use one to make a carbon fiber hood layup form, I believe, but the application could be used in a lot of different industries. Vacuum forming, for example. The mold they make would have taken weeks and cost thousands of dollars, but instead, they made it in a few hours. Very impressive.

When a certain type of person– teen to mid-20’s guys — find out that I am a machinist, often the first thing they ask is, “Can you make me a silencer?” Yes, and no I am not breaking Federal law so you can pretend you are James Bond. But no one really questions if mills and lathes are going to make the world less safe through the spread of guns and backpack nuclear bombs. Can 3D printing be used to make dangerous plastic guns that can escape metal detectors? Will we all be able to be John Malkovich in ‘In The Line of Fire’, ready and willing assassins with undetectable guns? Do you have any idea what I have done for God and Country, Frank?
Most likely, no. First off, running a 3D printer will probably never be as easy as a photocopier. There will always be some skill and art involved in making things, even with 3D printing. Well, at least until they perfect the Star Trek replicator. But I digress. Adrian Bowyer makes an excellent point in the video– ANY manufacturing technology can be used for making dangerous objects. Any gunsmith has a lathe and mill, and could conceivably make a complete gun from raw stock. On the whole, we try to see the potential benefit from advanced manufacturing, because that will be by far the end result, not a massive spread of Jello Biafra’s “harmful matter.”
Check out Mr. Bowyer’s RepRap project, while we are on the subject– a 3D printer that can replicate itself.

The engineers at Evo Utility Bike have come up with a really interesting concept for a bicycle. It utilizes a modular shoe attachment system for mounting different accessories. The system currently uses 3D printed (deposition metal laser sintering – DMLS) parts, though it may use more conventional manufacturing in large production. Very cool stuff! 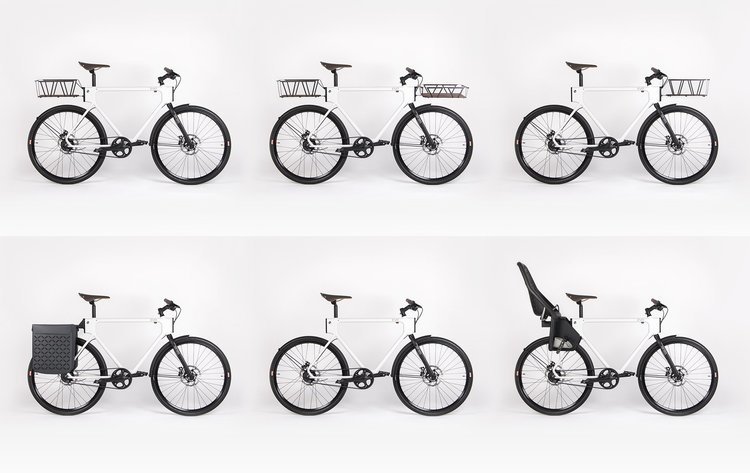 A wide variety of attachments can be added to a bike easily with this concept.